SQL goes through all the rows of the table and creates a table with total count of rows. 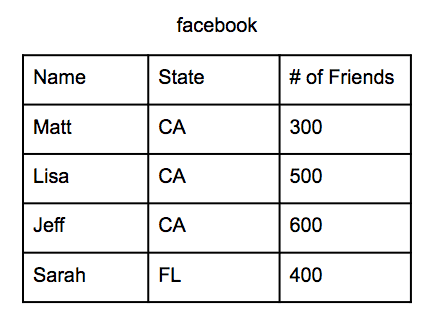 The COUNT aggregation can answer this, but SQL needs to be told what to group by in the query. SQL also needs the column it is grouping by in the SELECT statement so that the final table can show the data in its proper groups.

First SQL will group together data by the column or columns listed in the group by statement in this case state. Then SQL will perform the same COUNT operation as before but check which group to assign the count to.

The data and question can be even more complicated, in this example there is a city column in the table as well. The question could be how many rows are there for each State and City. 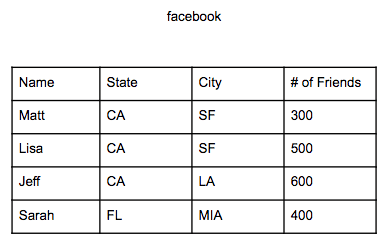 The COUNT aggregation will get us our answer as long as it is grouped by state and city. Remember SQL needs what we are grouping by in the SELECT statement as well so that these groups will show in the final table.

After COUNT, for all other types of aggregation will need you to define the column you are aggregating.

How would it SUM all the columns in the facebook table? The name column has text and cannot summed. Also there are multiple columns so we cannot SUM the row as a whole like the way we could COUNT the row as a whole. SQL needs to know which column the aggregation should be on, in this case the only numeric column is # of friends.

The Average aggregation operates similarly to SUM. The data will be more complex for this example.

To get an average SQL needs the sum of each group and then divide it by the count of rows in each group.

There are a few scenarios to be aware of when aggregating data that may make you misinterpret the results of your query.

Some cells will not have a value in it. This type of cell is considered null. Null is different than 0 or space “ ”.

COUNT(# of friends) does not count Nulls:

Written by: Matt David
Reviewed by: