There are two ways to organize relational databases:

Column oriented databases are databases that organize data by field, keeping all of the data associated with a field next to each other in memory. Columnar databases have grown in popularity and provide performance advantages to querying data. They are optimized for reading and computing on columns efficiently.

Traditional Database Management Systems were created to store data. They are optimized to read and write a single row of data which lead to a series of design choices including having a row store architecture.

In a row store, or row oriented database, the data is stored row by row, such that the first column of a row will be next to the last column of the previous row.

This data would be stored on a disk in a row oriented database in order row by row like this:

This allows the database write a row quickly because, all that needs to be done to write to it is to tack on another row to the end of the data.

Let’s use the data stored in a database:

If we want to add a new record:

We can just append it to the end of the current data:

Row oriented databases are still commonly used for Online Transactional Processing (OLTP) style applications since they can manage writes to the database well. However, another use case for databases is to analyze the data within them. These Online Analytical Processing (OLAP) use cases need a database that can support ad hoc querying of the data. This is where row oriented databases are slower than C-store databases.

Say we want to get the sum of ages from the Facebook_Friends data. To do this we will need to load all nine of these pieces of data into memory to then pull out the relevant data to do the aggregation.

This is wasted computing time.

Let’s assume a Disk can only hold enough bytes of data for three columns to be stored on each disk. In a row oriented database the table above would be stored as: 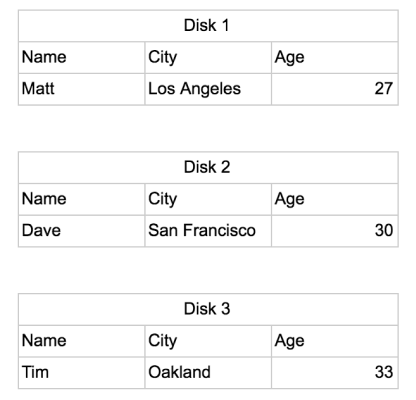 To get the sum of all the people’s ages the computer would need to look through all three disks and across all three columns in each disk in order to make this query.

So we can see that while adding data to a row oriented database is quick and easy, getting data out of it can require extra memory to be used and multiple disks to be accessed.

Data Warehouses were created in order to support analyzing data. These types of databases are read optimized.

In a C-Store, columnar, or Column-oriented database, the data is stored such that each row of a column will be next to other rows from that same column.

Let’s look at the same data set again and see how it would be stored in a column oriented database.

A table is stored one column at a time in order row by row:

Writing to a Column Store Databases

If we want to add a new record:

We have to navigate around the data to plug each column in to where it should be.

If the data was stored on a single disk it would have the same extra memory problem as a row oriented database, since it would need to bring everything into memory. However, column oriented databases will have significant benefits when stored on separate disks.

If we placed the table above into the similarly restricted three columns of data disk they would be stored like this: 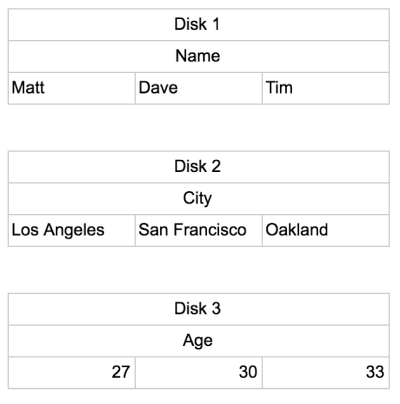 Reading from a Column store Database

To get the sum of the ages the computer only needs to go to one disk (Disk 3) and sum all the values inside of it. No extra memory needs to be pulled in, and it accesses a minimal number of disks.

While this is a slight over simplification, it illustrates that by organizing data by column the number of disks that will need to be visited will be reduced and the amount of extra data that has to be held in memory is minimized. This greatly increases the overall speed of the computation.

There are other ways in which a column oriented database can get more performance.

Let’s first examine an encoding technique that can be used by row or column oriented databases. The example of one of the columns being for states of the United States will show dictionary and bitmap encodings.

Now let’s take a look at Run-length encoding. This allows you to replace any sequence of the same value with a count and value indicator. For instance we can replace aaaab with 4a1b. This becomes even more powerful when you create projections with columns that are sorted since all values that are the same are next to each other.

In Row oriented databases, indexes can be created but data is rarely stored in multiple sort orders. However, in Column oriented databases you can have the data stored in an arbitrary number of ways. In fact, there are benefits beyond query performance. These different sort ordered columns are referred to as projections and they allow the system to be more fault tolerant, since the data is stored multiple times.

This seems like a complicated set of tables to update, and it is. This is why the architecture of a C-store database has a writeable store (WS) and a read optimized store (RS). The writeable store has the data sorted in the order it was added, in order to make adding data into it easier. We can easily append the relevant fields to our database as seen below: 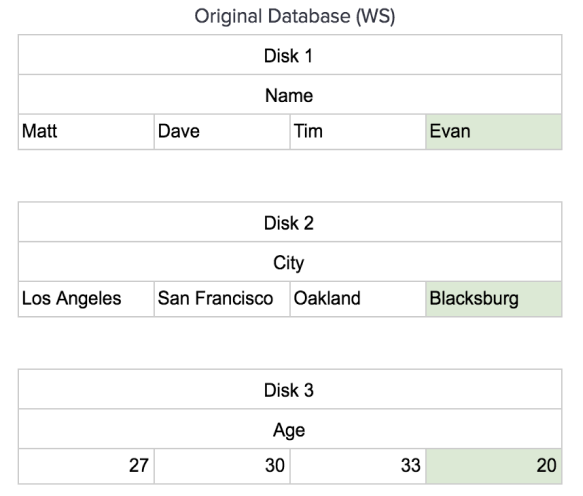 This architecture means that while the data is being updated from the WS to the RS the partially added data must be ignored by queries to the RS until the update is complete.

Column Oriented databases came out with a 2005 paper explaining the design that Redshift, BigQuery and Snowflake are all built upon. It’s why they all have about the same performance and relative costs. This column oriented database is being used by most major providers of cloud data warehouses. This has become the dominant architecture in relational databases to support OLAP.