So far we’ve been working with each table separately, but as you may have guessed by the tables being named tracks, albums, and artists and some of the columns having names like album_id, it is possible to JOIN these tables together to fetch results from both!

There are a couple of key concepts to describe before we start JOINing data:

PostgreSQL is a Relational Database, which means it stores data in tables that can have relationships (connections) to other tables. Relationships are defined in each tables by connecting Foreign Keys from one table to a Primary Key in another.

The relationships for the 3 tables we’ve been using so far are visualized here:

A primary key is a column (or sometimes set of columns) in a table that is a unique identifier for each row. It is very common for databases to have a column named id (short for identification number) as an enumerated Primary Key for each table.

It doesn’t have to be id. It can be email, username, or any other column as long as it can be counted on to uniquely identify that row of data in the table.

Foreign keys are columns in a table that specify a link to a primary key in another table. A great example of this is the artist_id column in the albums table. It contains a value of the id of the correct artist that produced that album.

Another example is the album_id in the tracks database. Earlier in this tutorial we looked up all the tracks with an album_id of 89. We also looked up which albums had an id of 89 and found that the tracks referred to the album “American Idiot”. TODO: Fix this paragraph/example.

It is very common for foreign key to be named in the format of [other table name]_id as album_id and artist_id are, but again it’s not required. The foreign key column could be of any type and link to any column in another table as long as that other column is a Primary Key uniquely identifying a single row.

If we didn’t have relationships we’d have to keep all the data in one giant table like the one in the figure here. 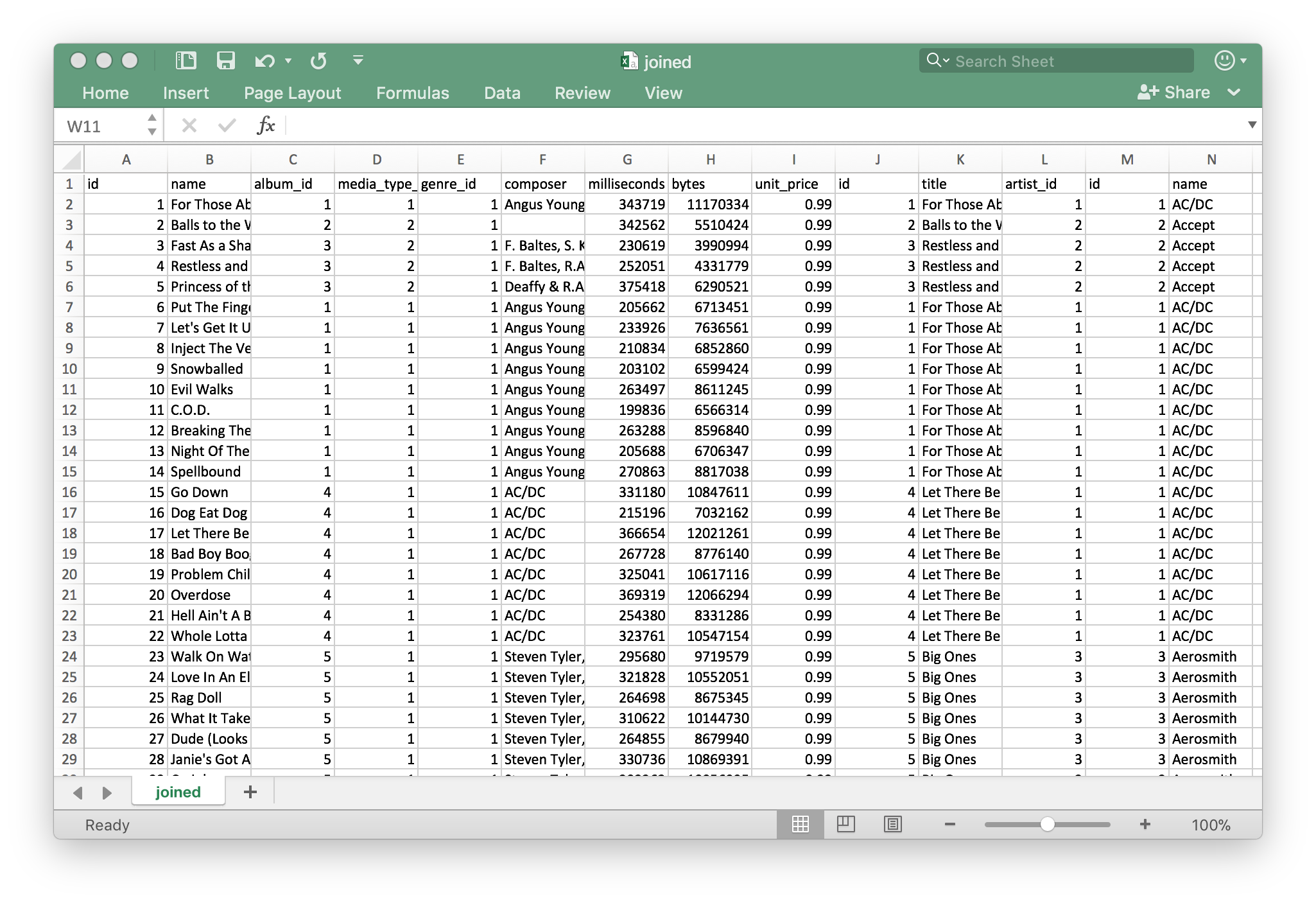 Each track for example would have to hold all of the information on it’s album and on the artist. That’s a lot of duplicate data to store, and if a parameter in any of that changes, you’d have to update it in many different rows.

It gets messy already even for our small example, and just wouldn’t be realistic for real company implementation. The world (and data) works better with relationships.

So let’s get to it! To specify how we join two tables we use the following format

Note that the order of table1 and table2 and the keys really doesn’t matter.

Let’s join the artists and albums tables. In the above figure we can see that their relationship is defined by the artist_id in the albums table acting as a foreign key to the id column in the artists table. We can get the joined data from both tables by running the following query:

Try for yourself to JOIN the tracks and albums tables.

There are a few different types of JOINs, each which specifies a different way for the database to handle data that doesn’t match the join condition. These Venn diagrams are a nice way of demonstrating what data is returned in these joins.

We can demonstrate each of these by doing a COUNT(*) and showing how many rows are in each dataset. First, the following query shows us how many columns are in the artists and albums tables.

And we know that each album does have an artist, but not all artists have an album in our database.

The inner join is going to fetch a list of all the albums tied to their artists. So we know that as long as each album does have an artist in the database (and it does) we’ll get back 347 rows of data as there are 347 albums in the database. And indeed, that is what we get back from the INNER JOIN:

An OUTER JOIN is going to fetch all joined rows, and also any rows from the specified direction (RIGHT or LEFT) that didn’t have any connections. In our database, many artists don’t have an album stored. So if we do a RIGHT OUTER JOIN here which specifies that the right listed artists table is the target OUTER table we will get back all matches that we did from the INNER JOIN above AND all of the non matched rows from the artists table. And here we show we do:

418 OUTER results minus 347 INNER results shows that there are 71 artists in the database that aren’t associated with one of our albums. Can you double check that that’s the case with SQL, by adding a WHERE condition to the above query filtering the results for those where there is no albums.id?

If we chose to do a LEFT OUTER JOIN we’d be choosing the albums table as the OUTER target. And here we are verifying that there are no extra albums that don’t have an artist associated with them.

And finally a FULL OUTER JOIN is going to return the JOINed results and any non-matched rows from either of the tables. We know that in the case of this dataset those will only come from the artists table, and the result will be the same as our RIGHT OUTER JOIN above.

Bringing it All Together

We can do more than one JOIN in a query so let’s bring tracks, ablums and artists together and see how it looks. Try running the following which is LIMITed to just 5 rows, as it’s a large result set and we don’t need to see all of it.

We can fix this by using aliases. In the following we’re trying to get the names of 8 tracks along with the name of the artist. Run it and you’ll see for yourself. Can you fix the mixup in them both having the same column name using the aliases AS "Track" and AS "Artist".

You have now unlocked the knowledge to fully enjoy most of the double entendres in this amazing song about Relationships. Do take a moment to enjoy.

Next – DATE and TIME Functions