Merging two data sets using SQL or SQL tools can be accomplished through JOINS. A JOIN is a SQL instruction in the FROM clause of your query that is used to identify the tables you are querying and how they should be combined.

Typically in a relational database, data is organized into various tables made of attributes (columns) and records (rows). In each table there exist a column that is the primary key which is a column where each entry uniquely represents a single row in that table. This is usually the ID (short for identifier) column. A column in a table that establishes an association with another table’s primary key via shared values is called a foreign key. Foreign keys are also typically titled IDs but prepended with the name of the referenced table.

This concept is applied when combining two or more tables together using a JOIN. In the example below, we have two tables: User Table (Table 1) and Event Table (Table 2). We want to join the two tables together to get user data alongside their events data. A real-life example of this would be if you had data from a CRM tool like Salesforce containing users who are paid customers (Table 1) and an events analytics tool like Mixpanel that tracks all the users that have performed an action in your product (Table 2).

Notice that between the two tables there is a common column (dimension) highlighted in green, User ID. In the User Table, the ID column is the user ID and it’s the primary key for that table whereas, in the Event Table, the User_ID column is the foreign key since that column refers to the ID column in the Users table. We can use this relationship to join the two tables together to get the user and events information in one table.

There are three common ways you can join any two or more tables together we’ll talk about first: Outer Join, Inner Join, and Left Join. Using the example User and Event tables above, let’s look at some examples of joins…

Let’s say you want to have a table that contains all your user and event table data together.

You would use an Outer Join to join the tables together. An outer join combines the columns from all tables on one or more common dimension when possible, and includes all data from all tables.

For a more detailed look at the Outer Join click here.

What if you want to have a table that contains only users that have done an action?

For a more detailed look at the Inner Join click here.

Now, what if you want to have a table that contains all the users’ data and only actions that those users have done? Actions performed by other users not in the users table should not be included?

For a more Detailed look at the Left Join click here.

In addition to these common join types, there are some methods which will result in additional rows in your output table as well as more columns. Two of these join types are called Union and Cross Join. These join types probably wouldn’t be as appropriate for our example tables above, but for the sake of this article we can still use them to see how these joins function. A Union Join will stack tables on top of each other resulting in new rows.

For a more detailed look at the Union Join click here.

A good use case for this would be if you’re looking to combine two tables by appending them rather than joining them. A Cross Join would result in a table with all possible combinations of your tables’ rows together. This can result in enormous tables and should be used with caution.

For a more detailed look at the Cross Join click here.

Cross Joins will likely only be used when your tables contain single values that you want to join together without a common dimension. 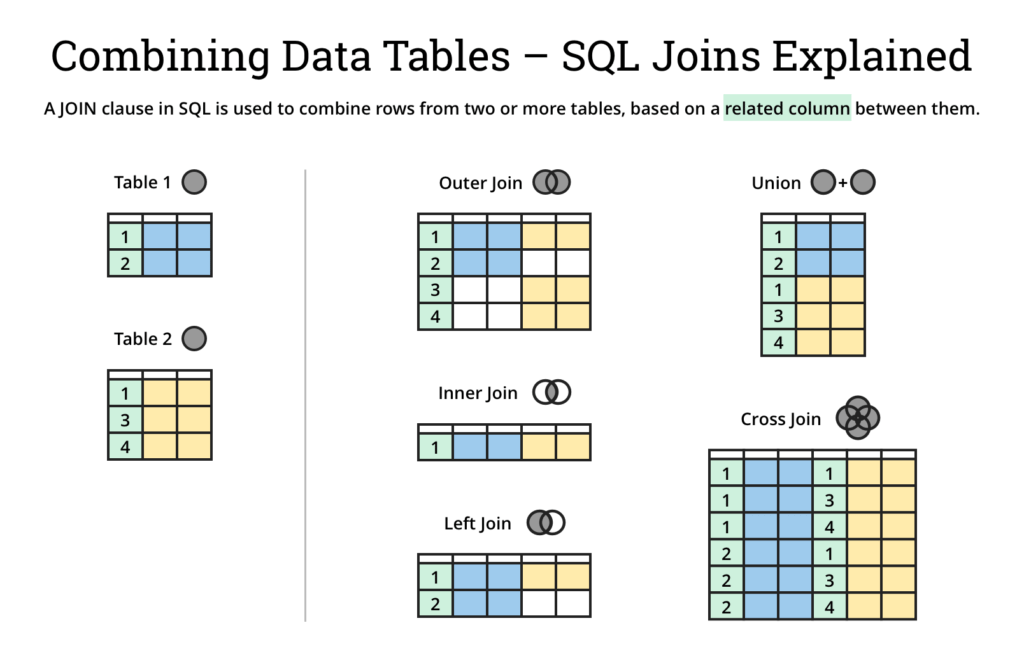